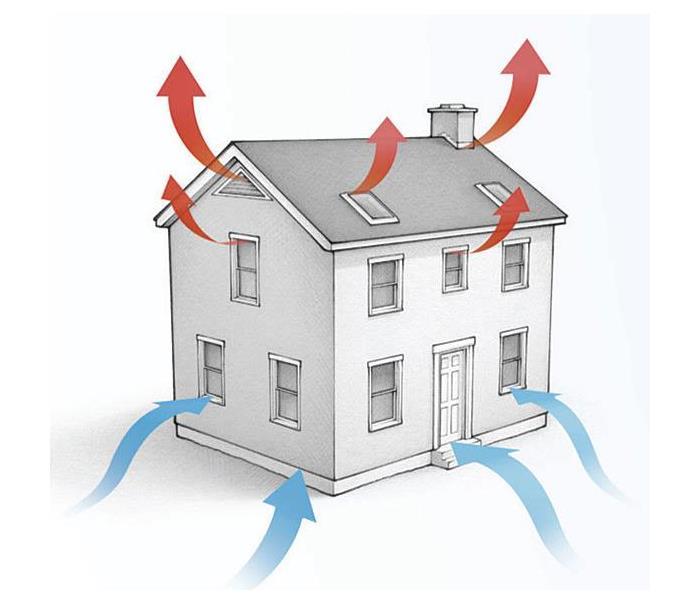 With the colder months upon us and the fact that it’s going to proceed to get colder something that every home owner should be aware of is a stack effect, or as it is also known chimney effect. In this article we will cover what stack effect is, causes and reactions, and also provide suggestions on how to combat it to improve your home’s ventilation.

Textbook definition states that the chimney effect is the movement of air in and out of buildings, chimenys, or flue-gas stacks, resulting from air buoyancy. Buoyancy occurs due to a difference in indoor-to-outdoor air density resulting from temperature and moisture differences. The result is either a positive or negative resistance force. The greater the thermal difference and the height of the structure, the greater the buoyancy force, and thus the stack effect occurs. The stack effect helps drive natural ventilation, air infiltration, and fire upwards into a flu or chimney like containment. In other words, warm air rises & cold air sinks, and when you’re trying to heat your home in the winter this can cause higher heating bills and colder homes. The same holds true in summer, except it’s cold air escaping through poorly sealed windows, doors, and vents.

Like wind, the stack effect can move large volumes of air through a building envelope. In the winter, the warm air in a heated building is lighter (less dense) than the cold air outside of the building; that warm bubble of air wants to rise up and out. Which creates the flow of air leaving the top of the building, drawing cold air into cracks at the bottom through windows, doors, and vents. In summer, the reverse happens when hot air outside of an air-conditioned house can push cooler indoor air down from the ceiling and out of cracks in the basement. This potentially can lead to moisture problems on the top floor.

Moisture rides on air currents, so in any part of a building that experiences a large flow of air between inside and out, moisture will condense on cold surfaces. You can sometimes see the results on brick buildings—as moist air accumulates in the brick, it can cause staining, efflorescence, and spalling from freeze-thaw cycles. These problems aren’t confined to brick, anytime there is pressure pushing moist inside air, or pulling moist outside air, into the wall cavity you can get condensation which in turn can lead to mold and rot.

The differences in temperature and pressure aren’t as great during the summer as they are during the winter.

Unlike most other pressures, the stack effect acts every hour of every cold day, and the pressures created by the stack effect are substantial. Which goes hand in hand with the fact that “leaky” buildings go through great amounts of energy. Air leaks can add to condensation, compromising the quality of the indoor air.

Air entering the building causes the lower levels to be cold, in response they turn up the thermostat. When the people upstairs get all that heated air, they open the windows to cool down. This escalates the flow of air leaving the building, which increases the flow of air coming up from the bottom floors. So the people downstairs plug in space heaters, you end up with a continuous cycle of sucking air up from the bottom, heating it, and blowing it out the top.

A Voice of Assistance:

In a house, stack effect pressures aren’t as high as in taller buildings, but they still cause uncomfortable drafts, moisture movement, and energy loss. As in all buildings, positive or negative pressure is highest at the top and at the bottom, so make sure the ceiling plane is tight. That means sealing all holes for can lights, connections between floors through dropped soffits and tray ceilings, and other pathways for air movement. At the bottom of the building, the biggest leaks are in the rim joist assembly because so many components are fastened together there. If all parts of the air barrier system aren’t correctly detailed, you’ll have fairly significant air leakage at the rim joist.

With this information, we hope that you correctly, and in the most reasonable and energy efficient way this winter, make sure there’s a good cycle of ventilation that isn’t allowing too much warm air to escape your home. This will help ensure everyone is kept warm, dry, and comfortable.

For further information, we reference research proven from http://www.greenbuildingadvisor.com/stack-effect-when-buildings-act-chimneys